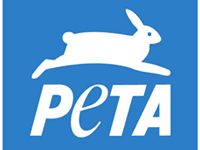 Animal rights are just as important as human rights. The only difference is that animals do not have a voice, so we must stand up and speak for them. PETA works for the animals and want to give proper education about the reality of what is going on in our daily lives, and in the animals’ daily lives as well. Still considered very controversial, we proudly support PETA’s work.

People for the Ethical Treatment of Animals (PETA) is the largest animal rights organization in the world, with more than 3 million members and supporters.

PETA focuses its attention on the four areas in which the largest numbers of animals suffer the most intensely for the longest periods of time: on factory farms, in the clothing trade, in laboratories, and in the entertainment industry. We also work on a variety of other issues, including the cruel killing of beavers, birds, and other “pests” as well as cruelty to domesticated animals.

PETA was founded in 1980 and is dedicated to establishing and defending the rights of all animals. PETA operates under the simple principle that animals are not ours to eat, wear, experiment on, or use for entertainment. PETA educates policymakers and the public about animal abuse and promotes kind treatment of animals. PETA is an international nonprofit charitable organization based in Norfolk, Virginia, with affiliates worldwide.

PETA believes that animals have rights and deserve to have their best interests taken into consideration, regardless of whether they are useful to humans. Like you, they are capable of suffering and have an interest in leading their own lives.

The very heart of all of PETA’s actions is the idea that it is the right of all beings—human and nonhuman alike—to be free from harm. Our world is plagued with many serious problems, all of which deserve our attention. Cruelty to animals is one of them. We believe that all people should try to stop animal abuse whenever and wherever they can.

Since 1980, PETA has campaigned to establish a global society in which humans consider the needs of what Henry Beston, noted American writer and naturalist of the mid-20th century, so beautifully called “the other nations.” We uphold the rights of individual animals to be respected. For most, that means simply leaving them alone.

PETA focuses its attention on the four areas in which the largest numbers of animals suffer the most intensely for the longest periods of time: on factory farms, in laboratories, in the clothing trade, and in the entertainment industry.

We have the power to spare animals excruciating pain by making better choices about the food we eat, the things we buy, and the activities we support.