MENUMENU
10% Off Every Product Sitewide | Use Code SAVE10 ♥

The Biggest Battles Happen in the Courtroom

Most of us do our part to help the environment by doing things like recycling or carpooling, and that’s awesome! But who fights the good fight when the problem isn’t a stray soda can or dripping faucet, but instead a corrupt corporation, big industry, or even our own government? That’s where our group of the month, Ecojustice, takes up arms.

Incorporated as a charity in 1990, Ecojustice’s vision is to harness the power of the law to protect and preserve the environment. This charity model was originally developed by the American Sierra Club Defense Fund, which at the time included young Canadian lawyer Stewart Elgie. Following the Exxon Valdez disaster in 1989 and seeing how its effects extended to his home country, Elgie recognized the need for a similar group in Canada, and returned to start Ecojustice, serving as a founding board member.

In the years that followed, the team has expanded to include over 20 lawyers and scientists from across the country, all dedicated to representing community groups, non-profits, First Nations, and individual Canadians in the fight for environmental justice.

Ecojustice on the Case 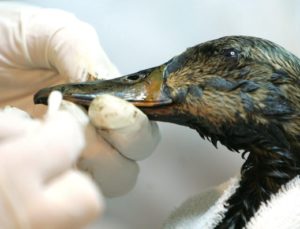 Here’s an example of Ecojustice standing up to a multi-billion dollar company and the government at the same time:

In 2010, when 1,600 ducks died after landing on a Syncrude tailings pond in Alberta, neither the federal nor Alberta provincial government laid charges. So Ecojustice helped an Alberta resident file a private prosecution, prompting both governments to take over the case and lay charges. Syncrude was found guilty and agreed to pay $3 million which was, at the time, the largest fine for an environmental offence in Canadian history! But that’s just the start; the group has secured countless other legal victories, and in many cases these victories set a precedent for cases that followed.

Why We Love Ecojustice

Obviously, Mother Nature can’t go to court, which is why the world needs groups like Ecojustice, and that’s why Contactsforless.ca has chosen Ecojustice as July’s group of the month. They are a 100% donor-funded charity, so visit ecojustice.ca to learn more about their cause and to make a direct donation.

In addition, as our group of the month, Ecojustice will be the default charity on every Contactsforless.ca order. However, if there’s another cause that’s near and dear to your heart, remember that you can still choose from over 50 different organizations during checkout, where Contactsforless.ca is committed to donating 51% of all its profit!

News Update: We have grown over 650% in the past year!

Here at ContactsforLess.ca, we work hard every single day to spread the message of our mission: sell contact lenses at 70% OFF or more, and we give 51% of OUR profits to non-profit organisations around the world that help save the planet. So what is this Big News?

Yes that’s right!! That means that while you save money, groups that help the world receive more of OUR money! We are proud to be able to support causes that help our planet and, ultimately, help our future generations, too! So you see – our hard work has been proven to be fruitful for all parties this year!

From all of us at ContactsforLess.ca, THANK YOU! Thanks for supporting us, the causes we support, and for being awesome, caring people!

And if you have ordered from us in the past – let us know how we did. Did we make you happy? Did we get it right? What could we improve upon? Let us know, we really want to hear from you!