Whether it’s for correcting our vision or simply for a look revamp, contacts are a very popular option, especially in the Hollywood world where actors take on roles that may require them to alter their looks or not wear glasses. This is when contact lenses are essential to them. You might have noticed an actor or two who have been wearing contacts for both purposes, but here’s a list of five stars who have been wearing contacts.

Supporting our planet is cool!

We used many websites to gather info for this blog article. One of the most important pages we found about celebrities giving was the website https://www.looktothestars.org/. Check them out and learn about your favourite stars and what causes mean the most to them! 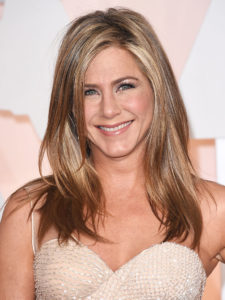 American actress, producer, and businesswoman Jennifer Aniston is best known for her role in the very popular series “Friends”. In her early 20s, she was diagnosed with dyslexia, which made it difficult for her to read books or to retain anything. She only found out about her condition during an eye exam with her optometrist.

“I had to wear these Buddy Holly glasses,” Aniston commented. “One had a blue lens and one had a red lens. And I had to read a paragraph, and they gave me a quiz, gave me 10 questions based on what I’d just read, and I think I got three right. Then they put a computer on my eyes, showing where my eyes went when I read. My eyes would jump four words and go back two words, and I also had a little bit of a lazy eye, like a crossed eye, which they always have to correct in photos.”

Today, she wears blue or green shades contacts even though it is unclear if she needs to correct her vision or not. The coloured contacts became part of her new look when she first starred in “Friends” and dyed her hair honeycomb with sun-kissed highlights.

Philanthropy: Along with supporting Friends of El Faro, a non-profit organization that helps raise money for an orphanage called Casa Hogar Sion in Tijuana, Mexico, Jennifer has appeared in many TV commercials for St. Jude’s Children’s Research Hospital, donated $500,000 USD to Doctors Without Borders, Haitian health care provider Partners in Health and AmeriCares, and also participated in the Hope for Haiti Now telethon. She has been part of many projects that help people and beings around the world. “We live an extremely beautiful, fortunate life being able to do what we get to do for a living. And so it’s a way of being able to be in a position to do something for people who are less able. It’s something that makes my heart smile.” 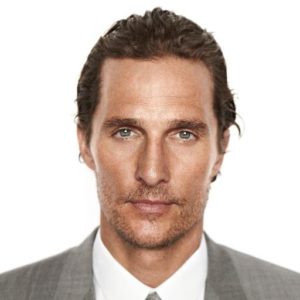 Best known for his roles in romantic comedies, Matthew McConaughey also had to physically change his appearance for other roles in much more serious movies namely Dallas Buyers Club, where he plays Ron Woodruff, a homophobic electrician who contracts Aids. While for him the major weight loss was easier than he originally thought, one scary downside is that the physical change had affected his eyesight. “…when I got down to where I lost 43 pounds, I did start losing my eyesight, I noticed it acutely and it had to do with the weight loss — it’s back now.”

Although he has recently been wearing new specs in public, in one of the new Lincoln car commercial he stars in, he is seen getting ready to go out and putting on a pair of contacts like his daily life routine. It is unknown if he occasionally wears coloured contacts, but prescription ones are part of it. 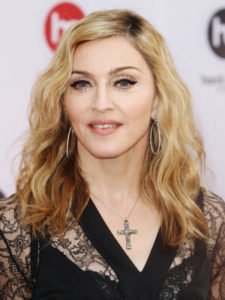 Queen of Pop Madonna is often seen wearing her glasses during show rehearsals, but when it’s showtime, the singer puts on coloured contacts that add to her glamorous look. Usually going for a green or a shade of blue, Madonna’s eyes have always looked healthy and beautiful.

Philanthropy: Madonna has supported a HUGE amount of non profits, but the one closest to her heart seems to be Raising Malawi. As she stated: “It has pretty much taken over my life, and I’m so grateful it has…I’ve started an organization called Raising Malawi…and any of your help would be greatly appreciated by me.” 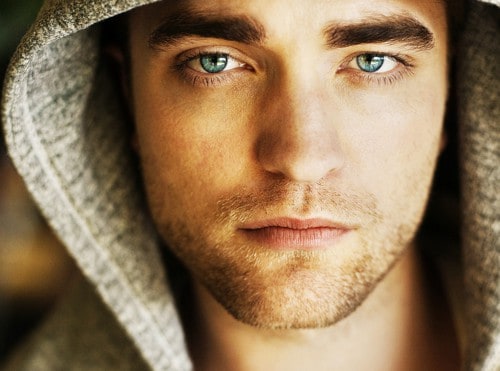 Contact lenses are not just for women, as Matthew McConaughey proves above. Robert Pattinson is known for being a contact lens connoisseur. In fact it is reported that he wore them during his protrayal of Salvador Dali as well as during the famous Twilight movie series and when playing his famous character during the Harry Potter series. Most people like to switch to blue lenses, but Robert reportedly has switched from his natural blue eyes to brown. Donthca make my brown eyes blue – as they say?

Philanthropy: Robert Pattinson is known for supporting a great many non-profits just like Madonna. From causes ranging from cancer to support for Haiti disaster victims, Robert is a world saver, and a handsome man all in one package! 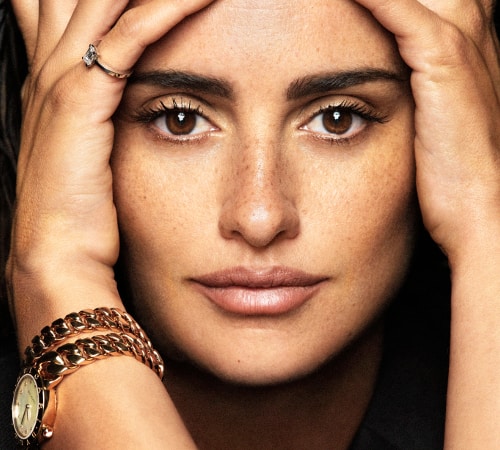 Penelope Cruz is considered one of the most exotic and beautiful stars among them all. What makes her so revered however isn’t just her looks, but also her love for helping others. She is also known for wearing contact lenses to upgrade her “look” from brown eyes to blue, hazel or her reported favourite, green. Contact lenses are a great way to change one of the most critical aspects of your look. The stars really do know best in this regard.

Philanthropy: Penelope Cruz is a big supporter of many causes, for example in 2018 she stood up for animals when she supported PETA’s anti-fur campaign. In fact she has been fighting to communicate why wearing fur sucks for many years. On top of that, she has supported causes such as AIDS and Haiti relief among others.

Contact lenses are a great idea, no matter how you look at it.

One thing both the stars and us here at Contactsforless.ca have in common is that contact lenses and saving the planet is a great combo. We donate 51% of our net profits, and these stars, among many, wear contacts to see better, live better and look better AND the donate their time and money towards important global causes.

So, we encourage you to always buy your contact lenses online with us if you live in Canada. Yes – someday we will be in the United States and across the planet, but for now we are a very special contact lens site serving only Canadians who wish to also save the planet! 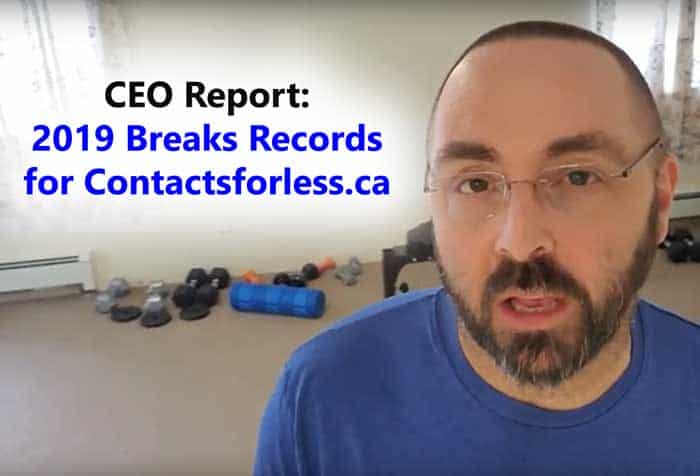 As we keep saying, there are companies that act like they care about the planet and then there is Contactsforless.ca – a company that actually does it. Most sites just make profits off of you and that is it. Maybe there is a site here and there that “donates” but do they donate 51% of net profits? Heck no! That would be insane! Yes it would be, because their reason for living is profits. At Contactsforless.ca our reason for living is to help our planet. That is why we are the fastest growing contact lens site in Canada.

It is one thing to say you are #1 like some of the other sites. It is another thing to prove it. Well, numbers don’t like like some folks do. Here is the math that backs up our claim. Let’s see the “other guys” do that. Don’t hold your breath, because they won’t. Trust us on that.

So here our record-breaking numbers. We are very proud of what we have accomplished. However, we won’t stop here. We plan to donate MILLIONS OF DOLLARS someday to help our planet, feed children, help victims of war, stop cancer, alzheimer’s and so much more!

Again, we never cease to amaze. We are growing so fast it is incredible. Here are how the numbers break down in this category:

It needs to be said that we are also the ONLY online contact lens website in Canada to donate 51% of its net profits to the non-profit that YOU the customer choose. No one does it. No one dare give away profits like that – except Contactsforless.ca.

So, since our mission is to give 51% of our net profits, we continue to give, give, give. Despite the fact that profit margins on contact lenses are so very small, we still manage to give away thousands. Check out these figures:

* It is important to note that we have donated more than $25,000 if you include the funds we donated prior to 2015 but are not officially part of our report totals.

TOP 20 NON PROFITS OUR CUSTOMERS LOVE THE MOST

Lastly, here is the part you have all been waiting for! No? Well – this list is very important to us. What causes do our customers care the most about? Here you go, the top 20 non-profits in 2018:

We predicted a year ago (see our 2018 report) that we would break records in 2019. Turns out we were right.

A BIG THANK YOU TO YOU – THE CUSTOMERS OF CONTACTSFORLESS.CA

As the Owner, Founder and CEO of this hard working, little company, I want to thank you all again – for supporting the very best, fastest growing contact lens site in Canada. We could NOT do this without you, our amazing online customers. I just want to thank each and every person who has ordered from us at Contactsforless.ca. We could not have done any of this without you. It isn’t just about the amazing growth of our small, humble company. It is of course also about how we work together to change our planet for the better!

…and remember, together we can change the world, one contact lens order at a time.

See our Google Rating, the highest of all contact lens sellers in Canada.

Here at Contactsforless.ca we support the most important non profit organisations in the world. There is no group more dedicated ot helping those in need than Doctors Without Borders / Médecins Sans Frontières (MSF). Yes, have donated over $25,000 so far. What is even cooler is that over 7% of those funds have been donated to Doctors Without Borders.

So, Canada – we invite each and every one of you to buy your contact lenses online with us at Contactsforless.ca and you can:

How and why do we donate so much money to save the planet? Here is CEO Paul to explain everything in less than a minute!

Learn more about Doctors Without Borders (read below):

Every year, Doctors Without Borders/Médecins Sans Frontières (MSF) provides emergency medical care to millions of people caught in crises in some 70 countries around the world. MSF provides assistance when catastrophic events—such as armed conflict, epidemics, malnutrition, or natural disasters—overwhelm local health systems. MSF also assists people who face discrimination or neglect from their local health systems or when populations are otherwise excluded from health care.

MSF is a neutral and impartial humanitarian organization that aims first and foremost to provide high-quality medical care to the people who need it the most. It does not promote the agenda of any country, political party, or religious faith. Morevover they endeavor to communicate its history, background, and capabilities to all parties in a given situation so that it may gain the necessary access to populations in need.

To learn more about this amazing group, go to their official website directly and read all about them!