Sharks are amazing, beautiful creatures. Unfortunately, they have a bad reputation which is very misleading. These slick creatures who are part of our ecosystem are pretty cool and beneficial to our planet! We have put a list of 10 cool facts about the shark that might give you another perspective on the stealthy and impressive fish. 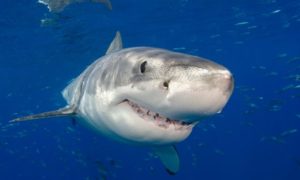 Alone from the Start

When baby white sharks (called pups) are born, usually by the dozen, they swim away from their mother who see them as prey. From day one, white sharks are on their own and have to quickly learn how to be stealthy as they are easy prey for bigger sharks. When a pup is born, it measures on average 1.5 meters (5 feet).

One Big Meal at a Time 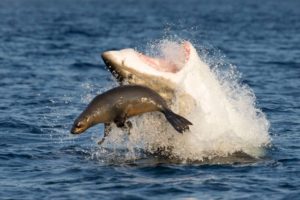 White sharks can last one or two months without a big meal! When they hunt, these sharks will usually go for large mammals such as seals or sea lions. When they catch one, it can satisfy them for a month or two until they hunt again, catching small prey, like other fish, in the meantime. Sharks also don’t chew their food! They rip of chunks of meat from their prey and swallow them whole.

People have unfortunately learned to fear sharks because of bad reputation and movies such as “Jaws” when, unfortunately, it’s sharks that have to be afraid of us! More than 100 million sharks die each year because of us. Humans have become sharks’ most deadliest predator over the years. Most of it is because of shark finning, where fishermen remove shark fins for later human consumption, specifically shark fin soup served in the biggest part in China. The sharks are then released back into the ocean where they are still alive but sink to the bottom and often are eaten alive by other fish.

Sharks are even older than dinosaurs! It is estimated that sharks have been swimming around for more than 450 million years and have survived all 5 mass extinctions during the past 493 million years! Tough cookies? Yup! The Megalodon, which existed 16 million years ago, could reach sizes of 15.25 meters (50 feet) in average! They were huge predators compared to today, but sharks are still kings and queens of the ocean. That is if humans stop killing them senselessly.

The Aztecs as well as the Kuna Indian tribe of Panama used to tie strings of chili peppers and spicy solutions to their boats to keep sharks away. The team over at Mythbuster, however, debunked this theory as sharks who would bite into spicy animal remains were not even phased by the taste.The chili peppers were more of lucky charms than they were repellents!

All you can Eat Buffet

Blue sharks, unlike Great Whites, eat and eat and keep on eating! They are hardly ever satisfied with their meals and will regurgitate after having eaten, and then will ask for more! Blue sharks usually feed on small fish and squids.

Great white sharks do not close their eyelids but instead roll their eyes to the back of their head when they attack on prey. This prevents debris from hitting the shark’s eyes as they swim quickly to the surface and also protects their eyes from their prey’s trashing about. 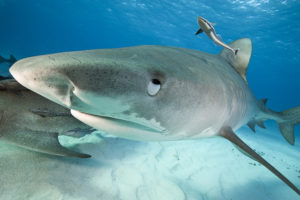 Because of the Full Moon

Some female sharks, once in a while, can reproduce without a male! This phenomenon is called parthenogenesis, where reproduction from an ovum is caused without fertilization. So some female sharks fly solo! Scientists have documented a few cases, however, in the right circumstances, most female sharks can get pregnant on their own.

The Great white shark, contrary to most fish, is warm-blooded. This allows the creature to adapt to different water conditions as it can regulate its own body temperature. Pretty cool!

At ContactsforLess.ca, we believe that sharks are very important for our planet. This is why we support groups such as The Sea Shepherd Society who help protect our marine wildlife. When you purchase your contacts through us, we donate 51% of our profits to groups like them who help save the planet. And YOU choose which one! So, thank you for helping us Save Our Planet, home of sharks, amazing creatures!